The parrots are a broad order of more than 350 birds. Macaws, Amazons, lorikeets, lovebirds, cockatoos and many others are all considered parrots.

Though there is great diversity among these birds, there are similarities as well. All parrots have curved beaks and all are zygodactyls, meaning they have four toes on each foot, two pointing forward and two projecting backward. Most parrots eat fruit, flowers, buds, nuts, seeds, and some small creatures such as insects.

Parrots are found in warm climates all over most of the world. The greatest diversities exist in Australasia, Central America, and South America.

Many parrots are kept as pets, especially macaws, Amazon parrots, cockatiels, parakeets, and cockatoos. These birds have been popular companions throughout history because they are intelligent, charismatic, colorful, and musical. Some birds can imitate many nonavian sounds, including human speech. The male African gray parrot (Psittacus erithacus) is the most accomplished user of human speech in the animal world; this rain forest-dweller is an uncanny mimic.

Currently the Convention on International Trade in Endangered Species (CITES) bans the sale of any wild-caught species, yet the parrots’ popularity continues to drive illegal trade.

Some parrot species are highly endangered. In other cases, once tame birds have reproduced in the wild and established thriving feral populations in foreign ecosystems. The monk (green) parakeet, for example, now lives in several U.S. states.

Parrots are some of the most spectacular and intriguing birds in the world!  Due to their intelligence and highly social nature, parrots also have the ability to make wonderful pets.  Given proper training and care, parrots can make excellent companions due to their desire to live as part of even a human flock*.

Parrots are a very diverse group of birds that can vary dramatically in size and color. For example, parrots range in size from the smallest Buff-faced Pygmy Parrot of New Guinea (3-4 inches) to the largest  parrot, the Hyacinth Macaw of South America (40 inches).

Parrots live in a variety of habitats ranging from hot, humid rainforests to alpine mountains!  They also have wide variations in their diets and nesting habits.

Did you know that not all parrots fly! For example, the ground dwelling Kakapo of New Zealand spends its entire life hopping on the ground and climbing in trees.

Throughout the ParrotFuneZone website you will have the opportunity to learn more detail not only about the vast diversity of many species of parrots but also what it takes to be a responsible bird owner.

What makes parrots different from other birds?

Good question! Let’s first look at characteristics that are common to all birds. For example, birds:

Parrots are unique within the Aves class based on the combination of the following characteristics: 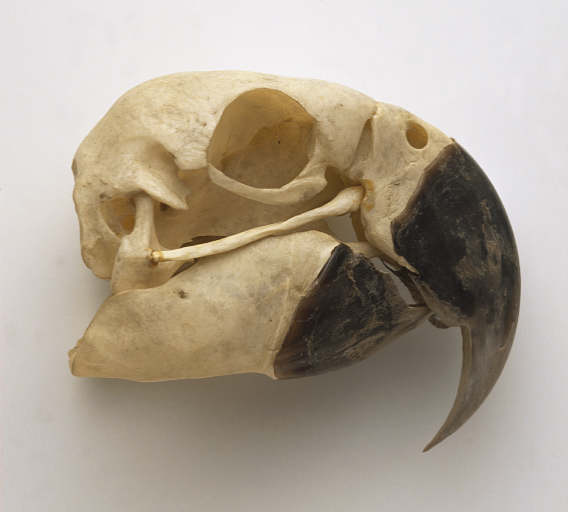 Beak shape – a parrot’s beak is short and wide with a curved upper mandible that hooks around the lower mandible which has a sharp, upward pointing cutting edge.

Parrots are often called “hookbills”, referring to the curved shape of their beaks.

The upper mandible in a parrot has a level of mobility not common to other bird species with hooked bills (i.e., hawks). This extra flexibility, in combination with the lower mandibles’ cutting edge, allows parrots to crush hard seeds and nuts.

Zygodactyl feet – a parrot’s foot has two toes pointing forward and two toes pointing backwards. Most birds have a three toe-forward, one toe-backward foot structure (Anisodactyl). A few other non-parrots also have a zygodactyl toe arrangement, most notably the woodpeckers and the cuckoos. The zygodactyl toe arrangement enables parrots to be proficient at climbing and grasping objects.

Parrots come from a wide variety of habitats around the world including tropical rainforests, savannas and grasslands. There is even a parrot called the Kea that lives in the snowy mountains of New Zealand. Birds depend on their habitats to provide food, water, shelter and nesting sites. Birds adapt to their environments in ways that enable them to survive. Although most people think of parrots as living in a rainforest, the fact is that some parrots also thrive in desert, alpine, grasslands and even urban environments!

What do parrots eat in the wild?

In general, parrots eat a wide variety of foods depending on their native habitat and what is available to them. Most parrots eat raw foods such as fruits and vegetable matter, nuts, grains, seeds, sprouts, berries, flowers, pollen, insects and larvae. Some parrots are very specialized feeders and eat only specific things. Others are considered opportunistic feeders because they eat whatever is available. Many parrot species are considered pests because large flocks often destroy entire farm crops.

Do parrots eat meat? You bet! Although not primarily carnivorous, some species of wild parrots have been observed eating meat. For example:

Lories and Lorikeets have a unique diet which mostly consists of nectar and pollen.

Some parrot species eat clay to soak up toxic compounds in their stomachs, and others are known to remove a seed’s or fruit’s protective layer that contains poisons, prior to eating that fruit or seed type.

Most parrots makes nests in tree cavities by chewing holes in suitable trees or finding holes made by other birds or as the result of decomposition. Nests made in this manner often use wood chips as a soft base in the hollow but some other birds gather materials such as twigs and leaves.

Some of the more unusual parrot nesting habits include cliff and ground burrowing. For example:

We hope you will keep exploring the rest of the ParrotFunZone site to learn more about the unique world of parrots!

___________________________
* The decision to get a pet bird is something that should be considered very carefully as they are unique in their needs and can be quite high-maintenance. It is highly recommended that you thoroughly research any species prior to bringing it into your home so that you can evaluate whether you are fully willing and capable of meeting all of its needs throughout its entire lifespan. Choosing a parrot as a pet is a lifetime commitment!