Parrots are known for their colorful plumage. In popular culture, they are associated with pirates, as exemplified by Treasure Island’s Long John Silver, whose parrot, Captain Flint, was constantly on his shoulder. They are best known, however, for their ability to precisely mimic sounds, including human speech. Many animals are able to communicate with humans, but only parrots (as well as a few other birds, such as mynas) are able to actually use human words. The ability to mimic human speech varies widely among parrot species and individuals. There is much debate about whether or not parrots actually use language, or whether they are merely mimicking human sounds without understanding their meaning. In either case, parrots are enormously intelligent and useful creatures.

Parrots are intelligent and sensitive creatures that make excellent pets. People are attracted to the brightly colored plumage of many species, as well as their acrobatics and tricks, which are fascinating to watch. Training birds to do tricks, as well as to talk and to say certain phrases or make certain noises on cue is not overly difficult, and can be very fun. As pets, parrots can be wonderful companions, although they can also be loud and messy. They are not solitary creatures, and require that their owners spend time with them daily.

In an article published in The “New York Times Magazine,” (Creature Comforts, 12/31/2008) Rebecca Skloot profiled people who use unusual helper animals, including a parrot. Jim Eggers, of St. Louis, MO, is afflicted with bipolar disorder, and has psychotic tendencies. He uses his African Grey parrot, Sadie, to help him calm down and avoid the rages and psychotic episodes which have, in the past, resulted in injuries and troubles with the law. Sadie can sense when Mr. Eggers is beginning to get upset, and speaks to him to help him calm down. Since using Sadie he has only had one incident of psychotic behavior. Sadie also helps alert Mr. Eggers to household occurrences, such as a ringing doorbell, which he sometimes misses due to his medication.

The combination of intelligence and loud voices makes parrots useful as watchbirds. As reported on Canada.com, on October 16, 2007, at 1:30 a.m., a Dallas, Texas man was awoken by his Mexican Red-Headed parrot who alerted him to a burglar in his garage. Dailymotion.com reported that in 2010, police in Colombia seized an Amazon parrot who was serving as a lookout for a drug gang; when anyone would approach, the parrot would yell (in Spanish) “Run! You’re going to get caught!”

Parrots have been valuable research subjects for scientists studying animal intelligence, and the ability of animals to use language. Other animals, notably gorillas and chimpanzees, have been able to learn sign language, but parrots, with their vocal ability, are uniquely helpful in gauging the intelligence of animals. The most famous example of these is Alex, the African Grey parrot, who died in 2007. Dr. Irene Pepperberg, working with Alex, was able to teach him a number of important concepts and showed that he utilized these concepts, such as number and color, in ways that went beyond simple mimicry, to indicate actual thought.

People love parrots. They are some of the most charismatic, adaptable and intelligent of all animals. They live in a range of environments on nearly every continent, from snow-capped peaks to humid rainforests to arid deserts. Like people, many parrots live in complex social structures, choose mates for life, and live for lifespans equal to or exceeding our own. We identify with them, admire their beauty and diversity. 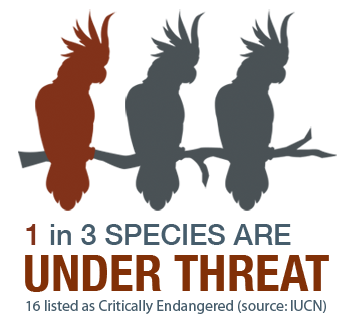 Our admiration of these bewitching birds comes at a price: thousands of parrots are trapped every year to be sold into the pet trade, with more than half dying before export from their range countries. This and habitat loss are the main reasons parrots are the most endangered group of birds on earth, with one in three species currently at risk of extinction in the wild.

As a result of this unsustainable trade, silent forests remain, devoid of the grandeur and spectacle of these amazing creatures, and the ecological impacts from their removal remain largely unknown.

Their great popularity means that we keep millions of them as companions.  A fortunate few enjoy long, rich and fulfilling lives receiving optimal care from well-informed and compassionate caregivers. Some however suffer from a lack of understanding of their needs and live short, miserable lives.

It is for these reasons that WPT’s focus is:

USES OF PARROTS
Scroll to top